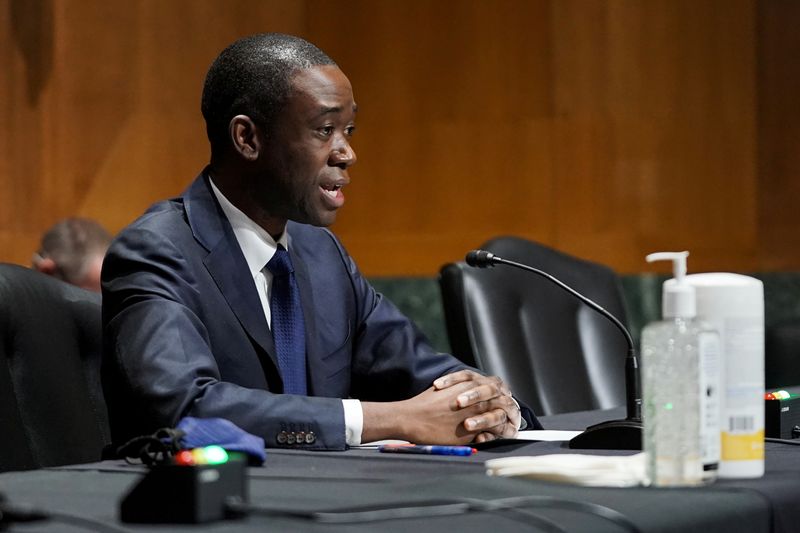 © Reuters. Adewale Adeyemo confirmation hearing to be Deputy Secretary of the Treasury 2/2

WASHINGTON (Reuters) – Wally Adeyemo, President Joe Biden's nominee for the No. 2 job at the U.S. Treasury, said it was critical to end the COVID-19 pandemic everywhere around the globe and doing so would require providing resources to some of the poorest countries.

Adeyemo made the comment at his confirmation hearing before the Senate Finance Committee when asked about a possible new allocation of the International Monetary Fund's own currency, or Special Drawing Rights (SDRs), that would allow rich countries to provide additional resources to poorer countries.

"Providing financial resources to some of the most poorest countries in the world is going to be critical to our national security if we seek to make sure that COVID-19 isn't something that continues to affect us," Adeyemo said.

Democratic Senator Elizabeth Warren told Adeyemo it was no surprise that the Trump administration had blocked issuance of new SDRs, a move akin to a central bank printing money, but she hoped the Biden administration would reverse that position.

"I hope Treasury will commit to delivering this crucial support," she said. "This pandemic won't be over for us until it's over for everyone, and our economy won't fully recover until other countries' economies are back on their feet as well."

U.S. officials have not communicated a firm position on a new SDR allocation, a move widely backed by Italy, France, Germany and other members of the Group of Seven advanced economies and the larger Group of 20 major economies.

It was not clear if Treasury Secretary Janet Yellen would back an SDR allocation when she meets with other G20 finance officials on Friday.

Yellen assured Italy's top central banker on Tuesday that Washington would work closely with Italy during its G20 presidency on shared priorities such as ending the pandemic and improving support for low-income countries, a spokesman said, but gave no details on the SDR issue.

IMF Managing Director Kristalina Georgieva first proposed an SDR allocation early in the pandemic but faced resistance from the United States, the IMF's biggest shareholder, which argued such a move would provide little aid to the countries that needed it most.

Republicans also raised concerns that it could provide funds to countries like Iran and Venezuela that are under U.S. sanctions.

Civil society groups and religious leaders are urging Washington to drop its opposition, arguing that an SDR issuance would help provide urgently needed resources for smaller countries at virtually no cost.