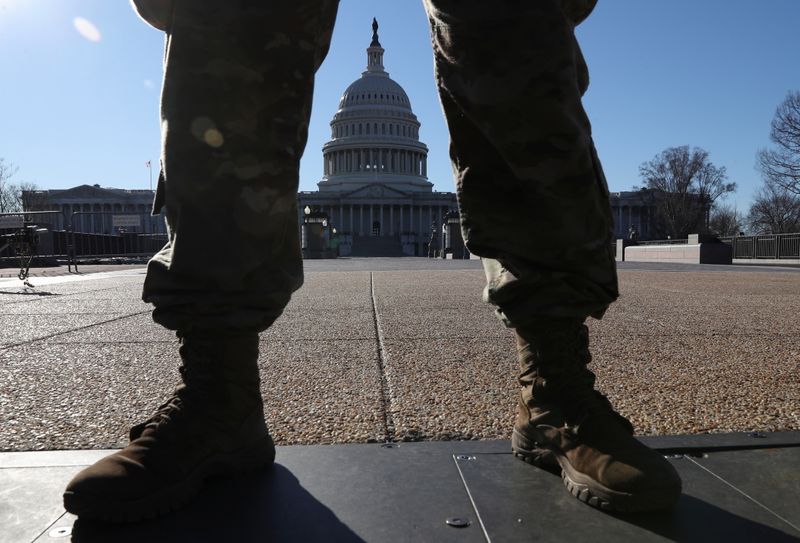 © Reuters. Heightened security at the U.S. Capitol Building in Washington 2/2

By Jonathan Landay and Julia Harte

WASHINGTON (Reuters) – Security was tight on Thursday at the U.S. Capitol in Washington, the scene of a deadly assault in January, after police warned that a militia group might try to attack it to mark a key date on the calendar of a baseless conspiracy theory.

A bulletin issued on Tuesday by the Department of Homeland Security and the Federal Bureau of Investigation said an unidentified group of "militia violent extremists" discussed plans in February to "take control of the U.S. Capitol and remove Democratic lawmakers on or about March 4."

March 4 is the day when adherents to the QAnon conspiracy theory believe that former President Donald Trump, who was defeated by President Joe Biden in the Nov. 3 election, will be sworn in for a second term in office. Up until 1933, March 4 was the date of the inauguration.

Early on Thursday, there were no signs of protesters anywhere along the steel fence that was erected around the Capitol, seat of the U.S. legislature, after the Jan. 6 insurrection by Trump supporters.

Inside the fence about a quarter mile from the building, dozens of National Guard troops – rifles strapped across their chests – were deployed, chatting in small knots on the sidewalks in the bright sunshine.

Freedom Plaza, a rallying point for previous right-wing protests opposite the Washington, D.C., mayor’s office, was empty except for a lone skateboarder and four bicycle police officers. Downtown traffic was light and few pedestrians were seen along Pennsylvania Avenue, which leads to the Capitol.

The Capitol Police have asked the Pentagon to extend the National Guard's mission in the city for an additional two months, a U.S. defense official told Reuters on Thursday. The mission was set to end on March 12.

The official, speaking on the condition of anonymity, said the request had been received and would be examined, and added it was highly likely that it would be approved.

Federal prosecutors have charged more than 300 people for involvement in the storming of the U.S. Capitol on Jan. 6 that led to five deaths, including a policeman. Those arrested include members of armed militia groups such as the Oath Keepers and the Three Percenters.

The Capitol Police said on Wednesday that they were "aware of and prepared for any potential threats towards members of Congress or towards the Capitol complex," including the possible militia attack.

The U.S. House of Representatives, which had been scheduled to debate and vote on a police reform bill, canceled its planned Thursday session after the warnings.

But the U.S. Senate was open for business and expected to begin debating Biden's $1.9 trillion coronavirus relief package.