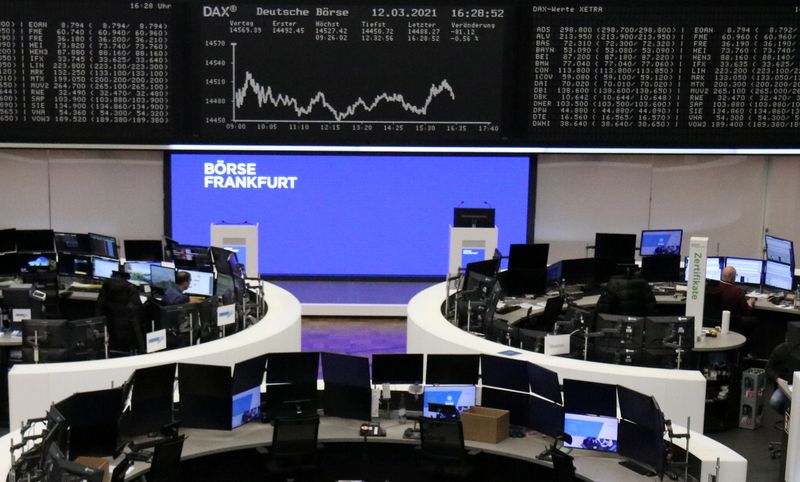 © Reuters. The German share price index DAX graph is pictured at the stock exchange in Frankfurt

By Sruthi Shankar and Devik Jain

Danone jumped 4.9% after the company's board ousted chairman and chief executive Emmanuel Faber due to growing pressure from shareholders. Its stock was on course to post its biggest percentage gain in more than four months.

Flutter gained 6.4% to the top of UK's FTSE 100 index after the betting group said it was considering listing a small shareholding of its U.S. FanDuel business.

The STOXX 600 index is less than 2% away from its all-time high, but trading has been volatile on worries that a rise in inflation could pressure central banks to put a lid on easy money, which is vital for economic recovery.

Rising bond yields have weighed on highly valued growth sectors such as technology, while driving gains in economically sensitive pockets in the market, like banks, energy and automakers.

"There's some big rotation going on, and what we're seeing is really a lot of churn with regards to growth and value," said Neil Wilson, chief market analyst at Markets.com.

"The DAX's record high or STOXX 600's record high, just seems like value parts of the market maybe being under-appreciated."

Meanwhile, China's economy continued to recover as data showed a surge in factory and retail sector activity in the first two months of the year, beating expectations.

German used-car retailer Auto1 rose 3.9% after brokerages boosted rating on the company a month after it raised 1.83 billion euros in its initial public offering.

H&M rose 1.6% after the Swedish fashion group reported a recovery in March sales as pandemic curbs eased in some markets, allowing hundreds of stores to reopen.

Swiss drugmaker Roche gained 1.1% after it said it would buy GenMark (NASDAQ:GNMK) Diagnostics, a U.S.-based maker of molecular diagnostic tests, in a $1.8 billion deal.